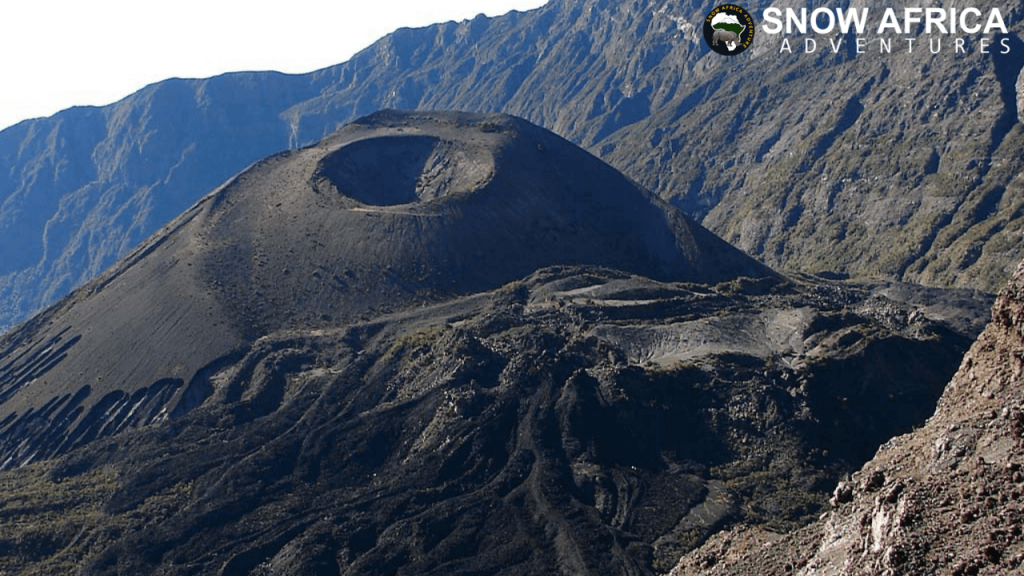 Grade C Mount Meru hiking is a strenuous climb so you need to be very fit in order to achieve this trek, you should be use to long trekking and had some high altitude experience.

Mount Meru accommodation
You can be booked into a hotel in Arusha or Moshi in order to climb Mt Meru. You can also fly into Nairobi or Kilimanjaro and catch the shuttle bus to either town. Mount Meru is easily accessible from Arusha.

From Kilimanjaro airport to Moshi is about 45 mins and one and a quarter hours to Arusha. From Nairobi airport it is about 5 hours drive to Arusha which is an interesting drive and gives you a good feel about the place and the way people live. Well worth the trip! This trek is often done as a warm up and acclimatisation climb for Mount Kilimanjaro. Many tour companies offer a combination package. The mountain is un spoilt and less congested as compared to it’s Mount Kilimanjaro and Mount Kenya counterparts.

Mount Meru has been labelled ‘Kilimanjaro’s little brother’ due to the fact that it is the second highest mountain in Tanzania. The four day hike allows you to analyze the scenic landscapes in a leisurely manner but Mount Meru trekking will challenge your body’s limits. The climb to the summit doesn’t require an athlete or an extreme alpinist but you should be in relatively good shape. The elevated viewpoint of the Arusha National Park allows you to discover the beauty that lies in the savannah plains featuring bursts of colorful vegetation and the scattered wildlife. The towering Mount Kilimanjaro can be spotted in the distance of the landscape. Tranquil hikes through the luscious canopies and the narrow trails enclosing the U shaped crater provide you with the perfect opportunity to clear your mind. Reaching the summit is an experience you are unlikely to forget.

Mount Meru is Mount Kilimanjaro’s little sister, standing at 4,566m compared to 5,895m, but is still an impressive freestanding volcano, which makes a superb four day climb to the top. It last erupted in 1910 therefore can be classified as an active volcano. The first Mount Meru ascent was made by Dr. Fritz Jaeger, 1904. The town of Arusha lies at the base of Mount Meru Trekking, loads of trek companies do this trek. Wild animals are frequently found on this mountain therefore an armed ranger usually accompanies the trekkers. It is Tanzania’s second highest mountain and thus a suitable base for those acclimatizing for Kilimanjaro climb. Mount Meru Climbing Safaris

At a height of 4,562.13 metres (14,968 ft), it is visible from Mount Kilimanjaro on a clear day, and is the fifth-highest mountain in Africa, dependent on definition.

Mount Meru is located just north of the city of Arusha, in the Arusha Region of Tanzania. It is the second-highest mountain in Tanzania, after Mount Kilimanjaro.

The Momella route; which starts at Momella gate, on the eastern side of the mountain is used to climb Mount Meru.

Mount Meru is the topographic centerpiece of Arusha National Park.

Its fertile slopes rise above the surrounding savanna and support a forest that hosts diverse wildlife, including nearly 400 species of birds, and also monkeys and leopards.

Drive from Arusha to the Mt. Meru park gate where you will be met by our game ranger and porters. Hike for the few hours to Mariakamba Hut at 8,500 ft. From here you may wish to take an evening walk on the slopes to view wildlife at one of the watering holes in the crater. Dinner and overnight rest at Mariakamba Hut, L,D

After breakfast hike to up to 11,500 ft to arrive at Saddle Hut. If time permits you can climb a little further on Mount Meru for a scenic view of the ‘Roof of Africa’, Mount Kilimanjaro. This will also be part of more acclimatization. Overnight at Saddle Hut, B,L,D

An early rise to hike all the way to the summit before the afternoon clouds cover the summit. From the summit, descend back to the 11,500 ft Saddle Hut in time for lunch. After lunch, hike down to Mariakamba Hut for dinner and overnight, B,L,D.

Breakfast at the camp and a leisurely morning. Descend to the park gate to connect with your waiting transfer vehicle back to your Arusha Hotel, continue with other programs or depart, B.