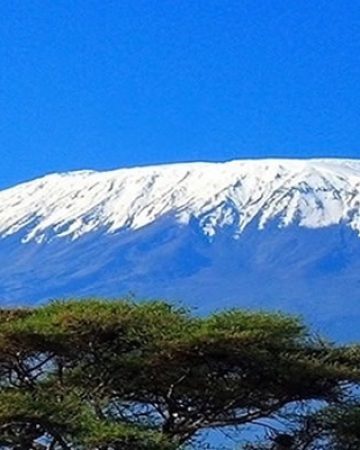 MtKilimanjaro Climbing Rongai Route. The Rongai route ascents Kilimanjaro from the northeastern side of the mountain, along the border between Tanzania and Kenya. This route retains a sense of unspoilt wilderness and offers a different perspective on Kilimanjaro by approaching it from the north.

RONGAI ROUTE
The Rongai route on Mount Kilimanjaro is a seven day camping route; it has the attraction of being a lower traffic and easier route compared to the southern slopes for climbing Kilimanjaro. It attracts about 10% of visitors to the mountain. The route is really a complete traverse, the only one to experience the arid northern side and the lush southern side. It’s also known as the Loitokok Route.

Starting from the Kenyan side of the mountain in the north its advantages are a more gradual and easier route in terms of terrain, plus there are excellent clear views of the mountain all through the approach. There is also more opportunity to see wildlife such as buffalo, elephant and antelope.

The route is quieter and flatter, and arguably has less scenic quality than other routes on the south side. However walking across the open plain with the summit massif in view all the time gives a real sense of vastness to the mountain. It is drier because of the fact that the mountain itself stops the rain clouds coming up from the south, so it’s really a very different experience in terms of scenery and terrain. For many, the solitude and sense of space is a big draw, although you don’t get to experience all the different habitats which are evident on the south side routes like Machame and Lemosho.

It takes five days to ascend from the NNE through the forest and onto the heathland and to the last camp at Kibo where it joins the Marangu route. Summit day is on day six up to Gilmans Point on the crater rim and then up to Uhuru Peak and all the way down to Horombo Hut, and the seventh day is a descent to Mweka Gate which is just half an hour drive from Moshi.

RONGAI ROUTE KILIMANJARO
Rongai route ascends Mount Kilimanjaro from the north-eastern side of the mountain, along the border between Tanzania and Kenya. The rongai route retains a sense of unspoiled wilderness.

The Rongai route is the only route that approaches Kilimanjaro from the north. Rongai route is truly one of the more remote and wild trails on the entire mountain. Despite that however, this route offers trekkers plenty of advantages, making it a very appealing option for those looking for a unique experience on Africa’s tallest peak.

Due to its remote nature, the Rongai Route is among the least visited of all of the trails on Mount Kilimanjaro. Those who choose this path will experience peace and quiet for much of the trek, encountering few other climbers prior to reaching the Kibo Camp, at which point the trail merges with the Marangu Route for the final push to the summit.

Montane forest  Register at the Marangu park gate with a transfer (approximately 2 ½ hours) to the Rongai trailhead. Meet your guide and porters before you begin your hike from the Nale Moru village. The small winding path crosses maize fields before entering pine forest, and then climbs gently through a forest. The trail is not at all steep, but is rather a gentle hike through beautiful country. The first night’s camp is at First Cave, at about 2,600 metres. There is a toilet and a wooden table with benches, but no hut. Water can be found just down the trail below First Cave, B,L,D.

The trail continues up towards Kibo, passing Second Cave (3450m) en-route, and reaching Kikelwa Cave at about 3600 metres. The views start to open up and you begin to feel you’re on a really big mountain! Water is in the obvious stream below the cave, although you might have to wander downhill a way to find some. Overnight at 3rd Cave camp (Kikelewa Caves), B,L,D.

A short but steep climb up grassy slopes offers superb views of this wilderness area. The vegetation zone ends shortly before you reach your next camp at Mawenzi Tarn spectacularly situated beneath the towering spires of Mawenzi. Spend the afternoon acclimatizing and exploring the area, B,L,D.

Continue ascending on the east side of Kibo crossing the saddle between Mawenzi and Kibo taking 4 to 5 hours to reach Kibo Hut. The remainder of the day is spent resting in preparation for the final ascent, which begins around midnight. Overnight at Kibo Camp, B,L,D.

Stone scree and ice-capped summit You will rise around 23h30, and after some tea and biscuits you shuffle off into the night. This is where the going really gets tough. The first section of the trail consists of a rocky path to the Hans Meyer Cave (5150m), also a good resting spot. The path then zigzags up to Gillman’s point (5 681m), which is located on the crater rim. This section is very steep with a lot of stone scree, requiring a great physical and mental effort. Probably the most demanding section of the entire route. Do the Kili shuffle and move slowly. From Gillman’s Point you will normally encounter snow all the way up to Uhuru peak (5895m), the highest point in Africa. Total exhilaration and satisfaction – you made it. Weather conditions on the summit will determine how long you can spend, taking photographs, before the 3-hour descent back to Kibo hut. After a short rest you gather all your gear for the ascent and head down to Horombo hut (3 hours) where you will overnight. The return to Horombo hut will seem surprisingly fast compared to the ascent. The total time spent walking on this day is around 14 hours, so be prepared for a very tough day. Later in the evening you enjoy your last dinner (with soft drinks and beer for sale at the camp office) on the mountain and well-earned sleep, filled with memories and stirring emotions, B,L,D.

After breakfast you continue your descent (6 hours), passing the Mandara hut, down to the Marangu gate. At Marangu gate you sign your name and details in a register. This is also where successful climbers receive their summit certificates. Those climbers who reached Gillman’s Point (5685m) are issued with green certificates and those who reached Uhuru Peak (5895m) receive gold certificates. You now drive back to Moshi for a long overdue hot shower, dinner and celebrations!! Overnight in Keys Annex Hotel, B,L.

Transfer to Kilimanjaro Airport for your flight back home or continue with your safari schedule. End of services. B   Tour Price: US$ 1,550 per person sharing.