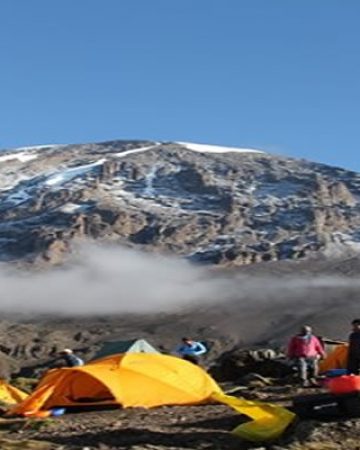 Affectionately known as the “Coca-Cola route”, Marangu route is by far the most popular route to the summit of Kilimanjaro. This could partly be as a result of the fact that the Marangu is the least expensive route, but more so, perhaps the fact that it is possible to do the Marangu route in 5 days, thereby getting to the summit one day earlier than on the Machame route. This is not always the best way due to a shorter acclimatization period. The Marangu route does however offer you the option of spending an extra acclimatization day on the mountain. This extends the route to a 6-day march, greatly increasing your chances of success. Hut accommodation on the Marangu route forms one of the main differences, compared to the other routes. It offers you the relative luxury of being able to sleep in huts along the entire route. Mineral water, soft drinks, chocolates and beers are also sold at all the camps on this route. All your equipment and supplies are portered and a cook prepares all your meals.

For the 5-day route, simply exclude the additional acclimatization day at Horombo hut – day 3 on the itinerary below.

Only one of the statements is true: climbing Kilimanjaro on the Marangu route is the cheapest option.

The Marangu route is not the most popular route any more. It has been surpassed by the Machame Route.

And I disagree with the statement that the Marangu Route is the easiest because it is misleading. It maybe the easiest trip to organise, have the widest, most comfortable path to walk on and offer hut accommodation, but that does NOT make it easier to reach the summit.

(Note: altitudes and distances are approximations. Different sources will give you different numbers.)

As for scenery, of course, the Marangu route is still breathtakingly beautiful. However, it is considered to be less scenic, as the ascent and descent travel along the same path and is sometimes crowded.

The trail is well maintained due to its popularity and will have you travelling through forests or the Saddle (a high-altitude desert) before reaching the Kibo Hut.

The route itself also attracts novice hikers or trekkers who are looking to enjoy the luxury of sleeping in dormitory-style hut accommodation, and this is the only trail which offers this type of comfort.

The huts in this route are:

Before you start planning your trek, don’t be tricked into thinking that a solid roof over your head makes this journey any easier. In the huts, everything is communal; from the basic washrooms to the showers and the dining halls.

Aside from the added bonus of hut facilities on the trail, many hikers and trekkers opt for the Marangu route because it is considered to be the easiest route on Kilimanjaro thanks to its gentle slope and direct path. Don’t forget though, as we mentioned earlier, the short time frame adds to the difficulty.

The Marangu route can take anywhere between 5-6 days to complete. However, it is suggested to avoid the 5-day trek as the quick ascent may reduce your chances of reaching the summit.

The main itinerary difference between the Marangu 5-day and 6-day route is the additional acclimatization day.

Previous trekking experience is highly recommended, as the days will feature 6-8 hours hiking with daily ascents of 900m to 1,000m, perhaps with the odd day ascending around 1,100m to 1,200m.

You will need complete confidence in your ability to trek for many days over difficult terrain. Extremes of altitude and weather may be encountered and a degree of physical and mental stamina will be essential to complete the hike as the days will be tiring.

The drive to the Kilimanjaro National Park gate. The journey passes through the village of Marangu, which is located on the lower slopes of the mountain. Once you reach the park gate, all hikers are requested to sign in at the Park office and make their final preparations for the climb. Porters will be seen arranging and loading their packs, containing the food, water, cooking gas as well as most of your equipment. Make sure that you have all your daypack items (containing at least drinking water, your lunch pack and extra clothing) with you as the porters ascend a lot quicker than the hikers. Our guides will be available to assist with any additional information or needs you might have. You now leave the Park gate and ascend on a cleared ridge trail through the rain forest.  The forest, suffused with mist and dripping with beards of moss, is also where most of Kilimanjaro’s animals are found. (An alternative and more scenic parallel forest trail, branches off to the left a few minutes after the gate. This trail follows the edge of a stream through the undergrowth and offers you the option to rejoin the main trail either, after 1½ hours hiking, or 1 hour before Mandara hut.)

Your first night stop, Mandara hut, is a group of wooden A-framed huts in a forest clearing. Each hut features 6-8 sleeping bunks with solar generated lighting. The total capacity of the camp is 60 climbers. Water is piped into the camp from springs above and there are flush toilets behind the main hut, B,L,D.

From Mandara hut the trail passes through a short stretch of forest, then skirts the base of the Maundi Crater and then emerges into the transition from rain forest to moorland. It is well worth a short detour to scramble up the rim of the Maundi Crater for your first really impressive view of the Kibo Crater. On a clear day, Kibo will glimmer in the distance, showing off her majestic glaciers in the morning sun. Once you are in the open moorland you will get the chance to see some of Kilimanjaro’s most spectacular plants – the endemic giant lobelia which grows up to 3 m in height and the giant groundsel (Senecia Kilimanjari), which can reach heights of 5m! After about 6 hours from here you reach the Horombo hut, where you will have hot washing water, rest; an evening meal and overnight.

Horombo hut is a village of huts perched on a small plateau, with buildings similar to Mandara, but with a total capacity of 120 climbers! Normally bustling with hikers, guides, porters and with an atmosphere of adventure and excitement. You will meet both ascending and descending hikers here. This extra day and night at Horombo is for additional acclimatization. A hike towards the Mawenzi hut, passing the Zebra Rocks on the way (about 3 hours up and 1.5 hours down), is strongly recommended. This hike will further assist with the process of acclimatisation. Remember to drink enough water and move slowly! All meals for the day are provided at the hut. Retire to bed early and get a last good night’s rest, B,L,D.

The recommended lower route (left hand fork) is much easier and nearly an hour and it also passes the last watering point at 4130m. You will have to fill your water bottles with all the water you will need until your return to Horombo hut in two night’s time (unless you are willing to buy Mineral water at Kibo hut). Once again remember to slow down and drink enough water!! Situated in the barren Alpine desert is Horombo hut, a stone build block house which has bunk beds for 60 climbers, but no streams with water nearby. It is however possible to buy mineral water and soft drinks at the camp office.

There are platform toilets behind the hut. The summit is now a further 1195m up and you will make your final ascent the same night. Prepare your equipment, ski-stick and thermal clothing for your summit bid. This should include the replacement of your headlamp and camera batteries and make sure you have a spare set available as well. To prevent freezing it will be wise to carry your water in a thermal flask. Go to bed at round about 19h00 and try to get as much rest and sleep as possible, B,L,D.

Hiking time: 8 hours to Uhuru – 6 hours to descend to Horombo | Distance: 6 km’s ascent – 21 km’s descent | Habitat: Stone scree and ice-capped summit You will rise around 23h30, and after some tea and biscuits you shuffle off into the night, and this is where the going really gets tough. The first section of the trail consists of a rocky path to the Hans Meyer Cave (5150m), also a good resting spot. The path then zigzags up to Gillman’s point (5 681m), which is located on the crater rim. This section is very steep with a lot of stone scree, requiring a great physical and mental effort. Probably the most demanding section of the entire route. Do the Kili shuffle and move slowly.

After breakfast you continue your descent (6 hours), passing the Mandara hut, down to the Marangu gate. At Marangu gate you sign your name and details in a register. This is also where successful climbers receive their summit certificates. Those climbers who reached Gillman’s Point (5685m) are issued with green certificates and those who reached Uhuru Peak (5895m), receive gold certificates. You now drive back to Moshi for a long over due hot shower, dinner and celebrations!! Overnight at Keys Annex Hotel, B,L.

Transfer to Kilimanjaro Airport for your flight back home or continue with your safari schedule. End of services. B